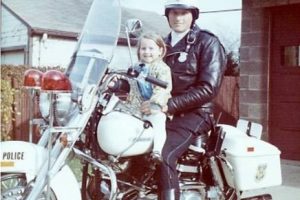 With Father’s Day just behind us, I found my circle of friends reminiscing about “Father-inspired” career lessons. Stories ranged from camping, Harley Davidsons, and military rearing to traveling the globe with dads that—as realized later in life — really weren’t “consultants” or “salesmen” at all, and it’s probably best to leave it at that.

There were quite a few laughs, as well as reverence for the dads no longer mentally or physically with us. When all was said and done, each of us walked away with a greater understanding and respect for whom we’ve become as a result of the male influences in our lives–especially when one said her dad was also the only mom she ever had.

Growing up in a multi-generational Blue Blood family was far from boring. Behavioral awareness and relationship management were ingrained long before they became today’s buzzwords of social and emotional intelligence. Friends that grew up in similar environments can relate.

When coaching MBA candidates at Wake Forest University Charlotte Center, I find that parental stories inspired many of their personal and professional lives–proving that coaching is a holistic process. The following are the lessons I learned from living with multiple generations of cops.

Convinced karma really exists, my father arrested an abusive man who was also well-known for his shyster reputation. When appearing in court, the man was stunned to find that the judge was also a former, unhappy customer whom he sold a shoddy furniture set to a few years prior.

Lesson: Treat everyone with kindness and without mal-intent. As the Dalai Lama stated, “Our prime purpose in this life is to help others. And if you can’t help them, at least don’t hurt them.”

“Going into homes with children eating out of dog bowls is an example of a true, powerless victim,” said my father. “Being a woman is a gift. Don’t play the poisonous victim card. You have a choice to move forward and use your strengths to overcome any challenges.”

Lesson: Everyone has challenges. Victims assume the world is always fair. Well, it’s not.  Playing victim is maladaptive and very self-limiting. We can’t change others, but we can control how we react. Be the solution.

Whether it was learning to drive or managing personal and professional challenges, my siblings and I were always told, “Accidents happen when people don’t stay in their lane and they ignore their blind spots.”

Lesson: There is a difference between helping and encroaching on people’s operations and professional space, yet it happens often in the workspace. Same goes for career choice. Be true to your talent, interests, and values, and don’t force yourself into a profession that you aren’t wired to do.

During Prohibition, my grandfather caught the police captain and other officers bootlegging liquor across Lake Erie from Canada. The captain told him to walk away now or “I’ll see to it that you never make sergeant.” My grandfather chose not to walk away.

Lesson: There is right; there is wrong. Promotion based on corruption or cronyism not only diminishes your personal integrity, but it certainly won’t manifest trust and respect from those you lead. Emotions cloud reason and always skew facts and objectivity.

When a lady decided to use the middle of a four-lane street as a sidewalk, my dad ran to her, held his arm out, and started a conversation while redirecting her to the sidewalk. No authority was necessary.

Lesson: Exhibiting confidence in your presence and language sets the stage, but avoid authoritarian overspill. Sometimes refraining to use the authority given achieves the best results.

Whether it was recognizing a murderer posing as drunk or identifying a person in need, my family Blue Bloods encouraged us to read friend and foe signals.

Lesson: Know your audience. Verbal and non-verbal cues not only reflect strength or weakness, but they can either attract positive energy or mitigate trouble.

When serving as security detail for the Beatles, my father was asked by Paul, John, and the manager if he’d like to join them for dinner. Always candid, my father replied, “Thanks, but no thanks. I need to go home to my wife and six kids.”

Lesson: Career and ambition are great, but when we die, you can’t take them with you. Whether it’s for yourself or those you lead, maintain a work-life balance.

A fire captain was missing at the scene of a burning church. Intuitively knowing that he fell between two brick walls, my grandfather ran into the church and tore the bricks apart with his bare, melting hands. This is only one instance where intuition served him well, and even reaped awards from Eliot Ness.

Lesson: Dr. Jonas Salk and Albert Einstein admitted that their intuition sparked their discoveries. Cops and FBI rely on it to defuse volatile situations, and a university study indicates that 80 percent of CEOs say that intuition drives decisions. The Gift of Fear was required family reading, and it is equally applicable to our personal and professional lives.

Ideally, the best decisions are made using both sides of the brain. But sometimes, you need to rely on intuition-based decision-making. It’s there for a reason.

Despite the shuffling walk, war wounds, and experience etched across his face, not a day goes by that I don’t receive a “safety” check-in from an old, cigar smoking officer–dad. I’m fortunate that he is still with us.

In what way did your father inspire your career? This Father’s Day, remember and honor that wisdom.