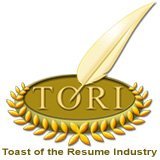 This week I signed up for the 2016 TORI awards (my sixth straight year).

Despite a strong temptation to let it rest, I’m glad I did not blow off the 2016 TORIs – every competition teaches me valuable lessons about resume writing.

In 1482, Leonardo DaVinci produced the world’s first resume – 534 years ago! – so maybe you’re thinking that every resume idea has already been figured out and implemented, right?

During the 2015 competition, I discovered 3 new tactics that changed the way I do resumes. In 2016, just this week, lightning struck again: I discovered three BREAKTHROUGH tactics – brand new and never seen before in any previous TORI competition.

First, I browse all the TORI winners for the past 10 years, and then I closely scrutinize the most recent 3 years.

Next, I pick my eight resume candidates, one for each category.

Finally, I imagine how to grab readers by the throat and force them to agree with my #1 mandate for a successful resume, namely, “How can you not want to interview this person?!”

HOW MANY TIGERS DO YOU SEE?

Finding a new angle for a resume is like finding a hidden tiger in this drawing (actually an optical illusion): Supposedly 17 tiger images exist, and if you stare at the drawing long enough you’ll either spot them or go blind trying 😉 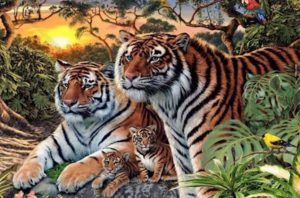 WHERE I STEAL MY “NEW” IDEAS

In years past I worried about running out of ideas. But that will never happen, because each year new clients show up with new challenges – opportunities for fresh ideas.

I do not actually generate “new ideas” for resumes.

Instead, I STEAL tried-and-true ideas from advertising. I’ve been an advertising copywriter since 1993, so I simply apply advertising principles to resume projects.

Suppose, for example, you could listen inside the recruiters’ heads, move them to action, and make them do what you what them to do – NOW!

Does that sound crazy?

Companies have scientifically perfected this form of “mind control” for at least 120 years.

Incredibly, these time-tested laws of persuasion are used everywhere in business except resumes and LinkedIn profiles  – The ONE area where people need “personal advertising” the most!

How do you weave advertising principles into an old-school resume format and persuade readers to take action?

That’s where the tiger image – actually an optical illusion – can help. If you focus on the illusion long enough, eventually an idea will materialize like a hidden tiger!

My new “hidden tigers” will open doors for new clients. But how about my existing clients? Should I make the case, rattle their cages, and charge them for update? Not decided.

Year over year, I can see how people adapt some of my approaches for TORI competition. That will definitely happen this year. I predict that many people will be adapting these tactics – but I got here first!