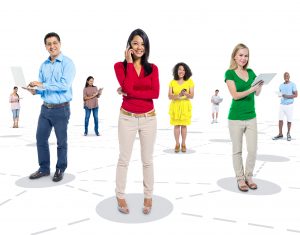 By suggesting you “be FRANK,” I’m not saying to throw etiquette and politeness out the window. You will, of course, be respectful of others’ time and make it easy for them to help you. (I know you can be charming…)

Instead, FRANK is an acronym I learned from Berri A. Wells, Career Activist, coach in the DC area, and a personal friend… The word is meant to bring to mind folks you might not have thought of as part of your group of connections.

Here’s how the memory jogger works for you.

F is for Friends.

You already thought of Scott—who was best man in your wedding and who you had a beer with last Friday. But what about the other ones? Didn’t Susan just get a promotion with that new IT company in town? And didn’t Eric used to work at the bank that’s opening a new branch next month? It’s time for inquiring minds to get on this!

R is for other Relatives.

Of course, you already knew your sister works at Genentech. But go a little deeper into the family tree. Now you’re also recalling that your 2nd cousin works at Edward Jones, your aunt works for Nugget Markets, and her sister by marriage works for AT&T. Great leads, right? They also happen to all be listed on the Fortune 100 Best companies to work for in 2108!

A is for Acquaintances.

Now we’re getting to old co-workers, friends of friends, and that guy you met at the Chamber mixer last week. I’ve gotten several clients in the past year from fellow members of a professional organization I’ve belonged to since the 90’s. So, if you belong to service, trade or community groups, don’t forget your fellow members. No, they are not your best friends. But let’s face it—people like to help people if they can.

N is for Neighbors.

Mr. Rogers was not the only good neighbor out there.  Talk to your neighbor, Joe, as you see him trimming his hedge. He might know someone who knows someone (Kevin Bacon?) that works where you want to go.

K is for Kids.

These are the people who you know through your children. Think, “school,

PTA, the Y soccer team, Little League baseball team, etc.” I once garnered a great lead from a mom in my adoption play group as well as my kid’s basketball coach.

Using this FRANK reminder, should shake a few people loose from your friend and family tree.

Marsha Toy Engstrom uses her 20+ of Human Resources and Leadership experience, combined with her passion and enthusiasm for personal development to help professionals navigate tough transitions in their career path. Visit www.GOCareerCoaching.com to plot your course.