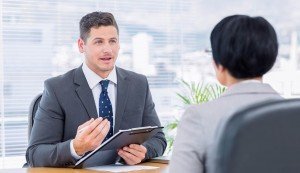 The interviewer won’t stop talking, won’t ask a question, and you are watching the 30 minutes allotted for your interview disappear. What is going on? Did he fail Interview 101? Does he love to hear his own voice? Or, is he trying to avoid finding out how qualified you are so he can justify hiring his unqualified nephew? Whatever the reason, you need to take action if you are going to turn this interview into an offer.

Ever seen Donald Trump stop a runaway interviewer who won’t let him talk? His method works every time. Two simple words, “excuse me” followed by the name of the interviewer gets him the attention he expects. If it doesn’t work the first time he keeps saying it until it does.

Alright, you’re thinking Mr. Trump has been doing this for years, it comes naturally to him. The truth is he wasn’t born with the ability to change the direction of a conversation—he had to develop it. You can too. Do it before your next job interview.

Once you have said “excuse me” as many times as necessary to get the interviewer’s attention, deliver your message. Take another lesson from Mr. Trump; take command and deliver a powerful, sometimes provocative statement. The following may help you customize your responses.

“You say you want someone who can (name major skill required for the job); I can do that.” Follow up with examples of using the skill before the interviewer says a word.

“Do you want to know how I would (name a task you would perform in this job)? “ You can wait for the interviewer to respond, or follow Mr. Trump’s example and provide answers without waiting for an answer to your question.

“I’m the person you want for this job,” then immediately deliver your 30 second branding statement.

Don’t let the interview end without telling your future employer why you are the best candidate.

Lorraine Beaman is a Certified Employment Interview Consultant and Founder of Interview 2 Work. She can be reached at lorraine@interview2work. com

Will This Be Your Success Story?

Success doesn’t happen in a vacuum but it does happen for career industry professionals who belong to CDI.

Read member successes, which could be yours>>