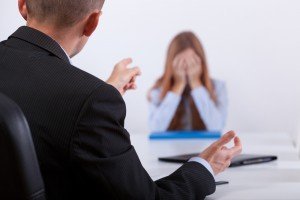 You will likely be asked why you left your job. It may be on a job application or at an interview, but at some point, you’ll be asked.

If your reason for leaving every job you’ve ever had was to take a better job, then you can go get coffee or play with the puppy. You don’t need to read any further.

If your reason for leaving a job was that you were fired, couldn’t work for that idiot a day longer, or were too ill to work, keep reading.

Rule No. 1: Your reason for leaving your job doesn’t belong in your resume, your cover letter, or in social media.

Only positive, achievement-oriented information belongs in your documents.

Most job applications give you about an inch and a half on a line to explain why you left a job. (I know, right? I can’t explain why I left for lunch in that space.) The problem is it’s tempting to use shorthand like saying you were fired or laid off. Don’t. It’s negative, and it’s usually a lot more complicated than that.

Don’t give a big, long, step-by-step explanation about what happened, either. Look at losing your job like a no-fault divorce. You’re not blaming yourself or the company. You’re just parting ways. Here are some examples to follow to keep your written answer short, positive, and to the point:

Rule No. 4: Be straightforward in your interview answers.

If you were terminated, the first thing to decide is whether you will bring up your job loss or if you will wait for the employer to mention it. I lean toward beating them to the punch. I appreciate straightforward answers and a no-nonsense approach. I also could have a coronary waiting for the interviewer to bring up the subject, so I’d rather get it over with.

There are a few good reasons to wait for the employer to ask the question. If, for example, your termination isn’t public knowledge, and there is no reason to believe the new employer will ask at all, then you might wait it out.

Rule No. 5: No blame in the interview, either.

When the interviewer asks why you left your job, if the circumstances weren’t pleasant, the first thing you want to do is defend yourself. “It wasn’t my fault.” “My boss was a complete idiot.”

It’s human nature. It’s also the worst thing you can say. A rant about your old boss is not going to endear you to someone considering being your new boss.

Saying you don’t know might seem like a way to avoid the subject, but it just makes you look disconnected and uninformed. Any sort of excuse is simply unacceptable.

If you lost your job, the best thing you can do when talking about it is to take responsibility. Now, I’m not saying you have to fall on your sword, be the village idiot, or say the last recession was your fault.

Quite the contrary. What’s going to get you the most respect (and get off the topic as quickly as possible) is admitting your part in the fiasco. If you lost an account, say you lost an account. If you and your boss had a personality conflict, say so without blame. Admitting your mistake is humbling. It’s supposed to be. It’s where the pieces hit the floor.

Rule No. 7: Tell what you learned.

After you have accepted your share of the responsibility, say what you learned from the experience. This is the most important part of your speech. It is also where you recover your respect. You get to pick up the pieces and show how you’ve put them together again.

The best possible outcome of this answer is to briefly let your new boss know why the same thing would never happen again because you’ve learned how to handle this circumstance successfully.

Rule No. 8: Your career will not end with a lost job – unless you let it.

Jeri Hird Dutcher offers resume and LinkedIn profile writing services as well as career coaching. Her ideal clients are creative and analytical  at the same time, such as Web developers, architects, and project managers. Find out more about her services at WorkwriteResumes.com.