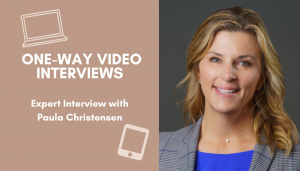 These days, you are likely to encounter a video interview when you are on the hunt for a new job. According to a recent study by Onrec, video interviews are currently the most popular method for conducting first-stage interviews. But it’s critical to be aware of the one-way video interview.

Not all first-round interviews look the same, particularly in today’s competitive and digital-first job market. The one-way interview is an increasingly popular video interview method. While data varies, some say that nearly two-thirds of companies are using one-way interviews.

To gain a deeper understanding of this technology, I spoke with Paula Christensen, the professional resume writer and interview coach behind Strategic Career Coaches. We discussed:

What Is a One-Way Interview?

For starters, what is a one-way job interview? “One-way interviews are also called pre-recorded or asynchronous interviews and involve candidates answering questions while talking into a blank screen,” says Christensen. She elaborates that candidates are provided interview questions through pre-recorded videos or text, which they then submit via the company’s portal.

“Most times, the interview responses are evaluated by a human, but sometimes artificial intelligence analyzes and grades the interviews,” clarifies Christensen. She shares that while one-way interviews are often conducted during the screening phase, they are increasingly being used during later stages of the application process.

The Role of Artificial Intelligence in One-Way Interviews

She explains that “AI technology groups candidates into high, medium, and low tiers based on their likelihood of success within the particular company. The benefits companies see after implementing AI interviewing platforms include cost and time savings, the ability to keep candidates engaged and fill positions faster, and flexible, more convenient scheduling.”

Spark Hire, HireVue, Interviewer.AI, and Vid Cruiter are a few of the most popular one-way video interview platforms, adds Christensen.

How to Prepare for a One-Way Interview

So, how do you get ready for a one-way video interview? Christensen’s top tip is to have a plan. She argues that the process is less threatening and intimidating if you practice beforehand. “You can become more comfortable by recording yourself on your phone, during a one-person Zoom session, or while working with a coach.”

Christensen also recommends preparing for your one-way interview the way you would for a two-way video interview. “Be aware of your surroundings, dress professionally, and position your camera so your face is centered, and your head and shoulders are visible. Show you are invested and engaged by looking into the camera, sitting up straight with your shoulders back, and leaning forward slightly to appear more attentive.”

“Another big mistake I see job seekers make is failing to test their internet connection before their interview,” shares Christensen. If you have had connectivity problems in the past, she says you should consider conducting your interview in a more reliable location. You can check your interview speed through speedtest.net. According to Christensen, for best results, your service speeds should be at least 10 to 25+ Mbps for downloads and 3 Mbps for uploads.

You also want to take note of any poor remote habits you might have picked up while using Zoom or MS teams, says Christensen. With this in mind, consider recording yourself and watching the video back, or partnering with a coach to ensure you make the best first impression possible.

On a final note, remember that getting ready for your one-way video interview is a lot like preparing for a traditional interview. The only difference is that you are speaking to a blank screen. You’ve got this!

Dr. Kyle Elliott, MPA, CHES (he/him/his) is the career and interview coach behind CaffeinatedKyle.com. His goal is simple – to help people find jobs they LOVE. He is an official member of the invitation-only Forbes Coaches Council and a member of the Gay Coaches Alliance.

2 thoughts on “Expert Guide On One-Way Job Interviews: How To Prepare And Succeed”